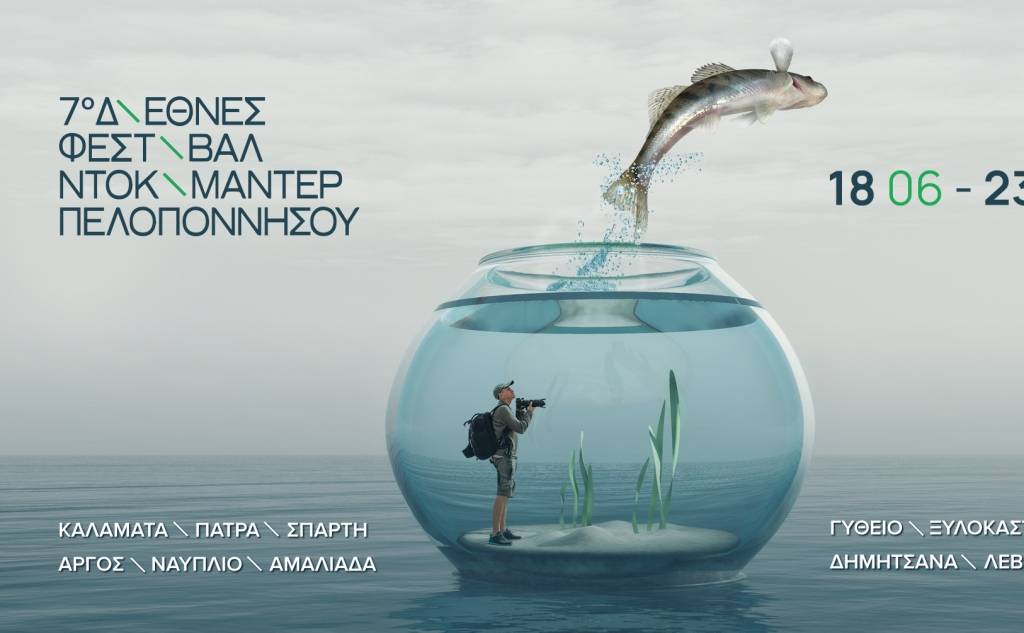 The Municipal Railway Park of Kalamata will host the second part of the 7th Peloponnese International Documentary Festival, from June 18th to July 4th, 2021, inaugurating the remodelled skating rink!
For more than two weeks, the Kalamata audience will have the opportunity to watch, in an ideal environment, 58 international and 27 Greek documentaries by great directors and to relive the experience of summer screenings with a physical presence, under the stars!
The program of the Festival is enriched by two seminars, a masterclass and a comics exhibition. More specifically, the following will take place:
- Seminar on "Creating a documentary" by Dutch director Robert Rombout for students of the University of the Peloponnese (08 - 18 / 06).
- Seminar for the "School of Street Cinema" by the Italian director Tekla Taidelli, for the students of the School of Fine Arts and the young people of the area (22 / 06 - 04 / 07).
- Masterclass on comics and their relationship with the Cinema by the well-known creator, George Botsos (06/19) and
- An International comics exhibition with the participation of Greek and foreign creators.
To the parallel events is added the presentation - for the first time live - of the graphic novel "21: The battle of the square" by Soloúp, according to Antonis Nikolopoulos on the first Sunday of the Festival (20/06).
This is the largest comic book project in Greece to date, combining systematic historical and archival research with the so-called Ninth Art. In it, Soloúp attempts to see, once again, the struggle of the Greek Revolution of 1821 through the eyes of the modern viewer, revealing dark secrets in the archives of History.
Finally, the 7th  International Documentary Festival has a surprise in store for the public: in a special event that will take place within the cultural program "Cinema the Station", the exceptional fiction film "The South" by Tassos Boulmetis will be screened, who, in fact, will attend the Festival and will award the prizes at the Closing Ceremony in Kalamata on July 4th!
The "Cinema o Stathmos" Program, which is under the auspices of the "Greece 2021" Commission, with the help of OSE and GAIAOSE, is opening four old railway stations where films of the modern Greek Cinema will be screened. The stations of Kalamata, Tripolis, Patras and Messologhi are participating in this project, cities that were selected based on their leading role in the historical event of the Revolution of 1821.
From June 18th to July 28th in 9 other cities, the films of the Festival will also be shown in open spaces, which are: Sparta, Patras, Gythio, Xylokastro, Amaliada, Akrata, Dimitsana, Levidi and Derveni. The screening program in these cities will last until July 28th.
The 7th PIDF, which is under the auspices of the Ministry of Culture and is implemented by the Creative Documentary Center of Kalamata for the seventh consecutive year, this year is co-organized with the Region of Western Greece, the Municipalities of Kalamata, Xylokastro-Eurostini, Amaliada and Sparta Piraeus Group Foundation (PIOP), the Art and Culture Association "Naked Eye" in Patras, the CoinSep "Eutopia" in Akrata and the complex "Megalo Cafe" in Levidi.
Stay tuned because the second part of the 7th Peloponnese International Documentary Festival is coming!
UPCOMING EVENTS
2nd August 2021 at 21:30
Kalamata Creative Documentary Centre