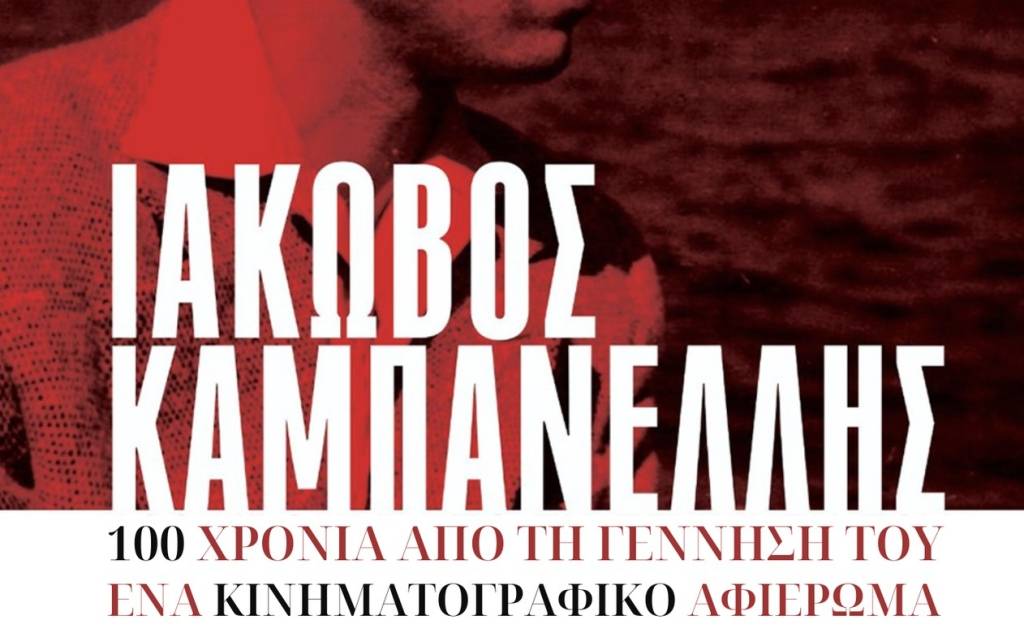 How many of you know the film work of Iakovos Kampanellis? How many remember that the legendary Stella of Kakogiannis is based on one of his plays, that he signed the script for Dragon Koundouros and directed two films himself?

The New Kalamata Film Club, wanting to shed light on his essential film work, presents a tribute to the versatile Greek creator, playwright, lyricist, screenwriter, journalist and academic, as part of the 2022 Iakovos Kampanellis Literary Year, on the occasion of the 100th anniversary of his birth.
On Wednesday 30th November at 19.00 and 21.00 at the Theodoros Aggelopoulos Amphitheatre of the Kalamata Labour Centre, two films bearing the "stamp" of the important creator are to be screened admission-free: The Cannon and the Nightingale (1968) directed by Iakovos Kampanellis in collaboration with his brother Giorgos Kampanellis, as well as The Carriage (1957) by Dinos Dimopoulos, in which he signs the script.

Watching these films, documents of an entire era, one realises that Iakovos Kampanellis creates (or inspires) original scenarios that escape from the clichés of the so-called "good old Greek cinema" and from the standardisation of the film genres of the time. Despite all this (or perhaps precisely because of this), his significant contribution to Greek cinema remains largely unknown - a fact that is partly explained by the underestimation of the screenwriter's work at the time.
Kampanelli's films make their apt commentary on the socio-political situation and anthropo-geography of Greece, without moralising, with humour, mockery and, at the same time, a penetrating look and love for his characters. It's worth watching them again on the big screen.

The Carriage
Mr Anestis, an old coachman (Orestis Makris), does not want to change his profession at a time when the car dominates more and more, and taxis sideline him. He lives with his only son Nikos and his girlfriend, an orphaned girl. However, Nikos is forced to abandon her and goes astray. Mr Anestis is forced to sell the carriage and, with heartache, goes out into the streets to sell cigarettes with a small suitcase...

Iakovos Kampanellis, with "Amaxaki (carriage)", returns to drama to talk with nostalgia about a world that is being lost, about the end of an era, but also about old age being pushed to the sidelines and the clash of generations. Dinos Dimopoulos and Dinos Katsouridis film the picturesque districts of Athens (such as Aerides) and their inhabitants with love. The film, which was shown at the Karlovy Vary Festival, was produced by Finos Film, with which, despite the film's great success, Kampanellis never collaborated again.

The Cannon and the Nightingale
A spinal film consisting of three independent stories with the common theme of the behaviour of the Greeks when they are under a foreign yoke. The first story takes place in Syros, conquered by the Italians in 1943. The Italian commander of the island tries in vain to impose himself on the inhabitants who mock the Italian occupation forces. The second story takes place in Cyprus in 1957 when the EOKA fighter Grigoris Afxentiou (Giorgos Tzortzis) is forced to leave his beloved (Niki Triantafyllidis). The third story takes place in Patras in 1944. It focuses on the relationship that develops between a wealthy man (Dionysis Papagiannopoulos) and the German officer (Georgos Kampanellis) who has taken his house.
The film, an independent production that Iakovos Kampanellis co-directed with his brother Giorgos Kampanellis, actor and producer of the film, had been screened for a month and then banned by the dictatorship after viewers caught on to the film's indirect references towards the political state. It was a film precursor of the later "cinema of the creator" and the favourite of Kampanellis himself. In it, he could develop his artistic vision freely.