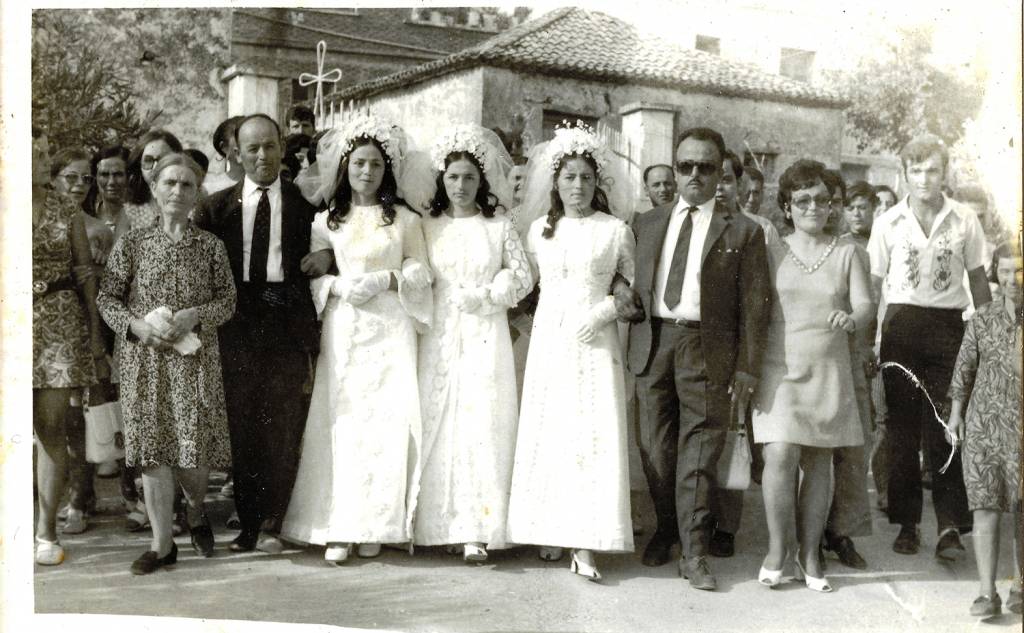 Parents Thanasis and Hariklia are marrying three of their five daughters, Tula, Sofia and Voula, at the church of Agia Triada, at the same time!

Three brides, with almost identical wedding dresses, three grooms (Kostas, Thodoris and Nikos, respectively), three groomsmen and a wedding that became the focus of discussion even abroad. A joyful event that we do not easily encounter today, even more, in fact, at a time when life situations were much more difficult.

The three brides, who met their husbands either out of love or by arranged marriage, walked down the aisle and, even, danced their first, bridal dance together in the courtyard of the temple. The people who gathered to honor the family, but also to see this special wedding up close, were many. Many of them were uninvited people who wanted to wish the three couples happiness. After the end of the wedding ceremony the traditional custom of dancing outside the church followed, while the fun lasted until the morning hours with the party that continued at home, at the family courtyard.

The guests arrived at Mesopotamos on Friday, two days before the wedding and the cook's cauldron got “on fire”. Three houses, an entire workshop was needed to prepare the traditional “diples” that would be offered to the people. Characteristic is the fact that the girls' mother fainted two or three times due to fatigue and tension while they were making them.

All the customs were followed, which, even today, are revived in many villages of Messinia, remaining indestructible over time. The dowries of the girls were nailed to dining tables, thus creating an exhibition for the people who were there. The clothes were placed in large bundles along with laurel branches - a symbol of prosperity and glory since antiquity. The bride's mother-in-law fed the bride – to - be a spoonful of honey in order for her to be sweet-mouthed and kind to the groom's in-laws and relatives. She also tied the couple with a white handkerchief and made them walk on an iron at the entrance of the house to make their marriage be as strong as iron. Each bride took a loaf of bread, cut it in four and then threw the pieces to the four corners of the horizon with the aim to be caught by the guests, primarily the unmarried girls.

The next day, on Saturday, the "proikologists" (dowry takers) took action. The grooms’ friends had to go to the girls' house to get the dowries, but, first, the brides should pin a white handkerchief on their lapels. In order for the men to get the coveted trunk they, first, had to pay the young unmarried girls who were sitting on it, after a relentless bargaining procedure…

A black and white photo, a different wedding, a special experience, a journey through time. Unique elements that leave the traces of tradition in their path as a legacy for all of us.

Parents Thanasis and Hariklia managed to refute the widespread belief that only boys were children (see here "Looking for…  boys"), as these would be the pillars of the house, while the daughters would be a financial burden.

Tula, Sofia and Voula got married at the same time at a unique ceremony and soon Vasiliki and Christina followed their steps.

At an old age, their favorite habit was to share a large bowl of chips and, although they did not have - according to tradition - a "pillar in their house" (male), they did have many hands that cared for them until their very old age (103 and 101 years respectively). It is difficult for anyone to say something like this by chance.