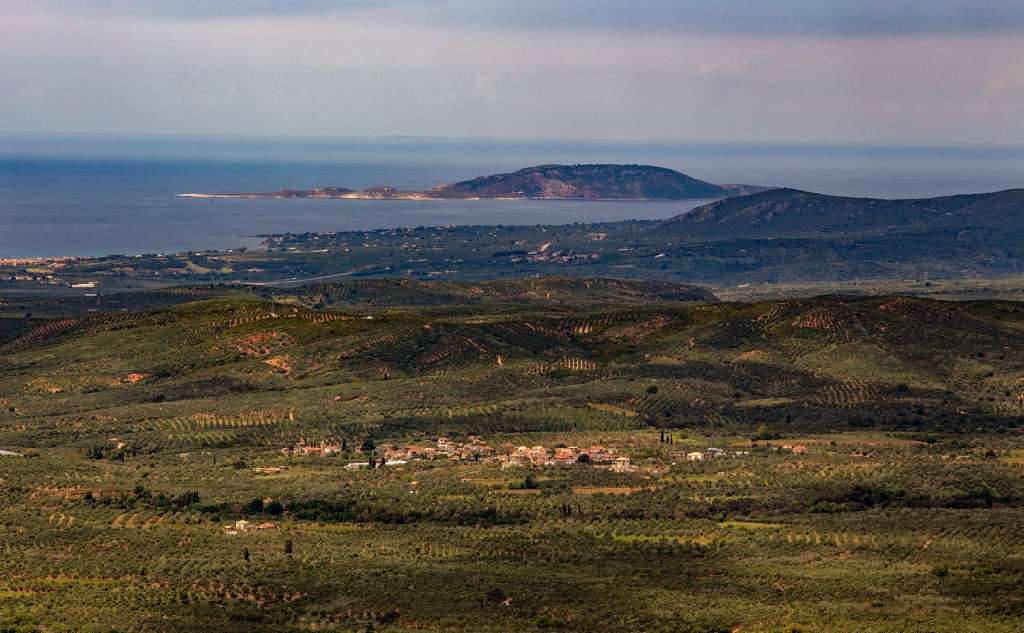 Koukounara is built at an altitude of 208 metres, while the area consists of rich flora and fauna as the small Arapis River flows through it. The village is 7 kilometres from Gialova, 6 kilometres from Chandrinos and 14 from Pylos.

According to the findings of the Prap excavation programme, during antiquity, the area of ​​the village was one of the most important centres of Nestor’s kingdom and one of the main cities of the kingdom of Pylos, with references to the plates of Linear B. The most likely names of the ancient city ​​were pa-ki-ja (Sfagia (Slaughterhouse)) or ka-ra-do-ro (Charadros (Canyon)).

In the broader area of ​​today's village, the remains of a mansion and a settlement were identified and excavated, as well as seven vaulted tombs that testify to a relatively expanded settlement with a large population. Among the archaeological findings from the vaulted tombs, gold jewellery, stone arrowheads, bronze vessels, and weapons stand out, as well as parts of helmets lined with boar tusks.

The current village has been mentioned, at least, since the Venetian occupation as Koukkounara or Koukounaria (Cuccunara or Cucunaria). In 1853, the village was also mentioned as Koukounara in the second volume of the "Hellenics" by Iakovos Rizos Ragavis.

Visitors can see the traditional houses in the village, the old Primary School building and the Agios Athanasios church. Also, on an estate in the area of ​​Koukounara, there is an aria tree (a type of oak) whose age exceeds 200 years. Due to its size and age, agronomists have proposed that it be declared a preserved natural monument. In the area, the tree is known as "Verginadis’ Aria", after the estate’s previous owner.

Finally, at a distance of one kilometre from the village is the "Katarrachali" location, where there is a flat area with the characteristics of a small natural citadel. In this location, archaeologist S. Marinatos discovered architectural remains of an apse-shaped palace with a forecourt, the main room and an arch to the east.

SIGHTS IN THE REGION OF KOUKOUNARA

MYTHS, STORIES & CUSTOMS OF THE REGION OF KOUKOUNARA

INVEST IN THE AREA OF KOUKOUNARA

BUSINESSES THAT OPERATE AT KOYKOYNARA

BUSINESSES THAT OPERATE NEARBY AT KOYKOYNARA

COOKING CLASS IN AN OLIVE GROVE IN MESSINIA