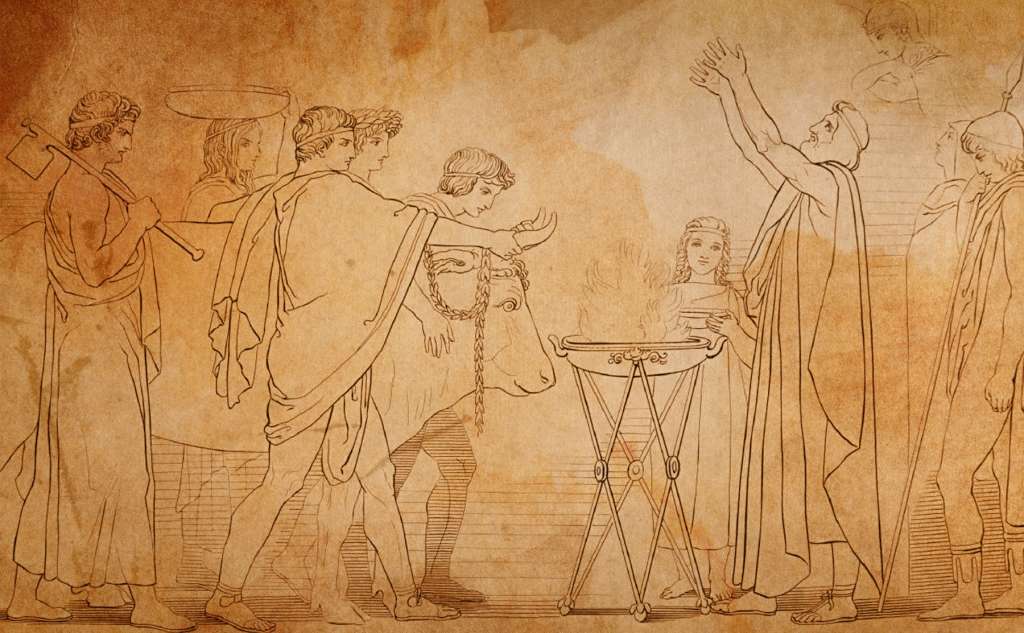 The second Homeric saga/epic which follows the fall of Troy, the famous Odyssey, starts not with the adventures of the protagonist of Odysseus but with the consequences that his delay had on his son Telemachus.

Telemachus, unable to control the situation with the suitors, leaves Ithaca looking for information about his lost father while accompanied by the goddess Athena who has taken the form of mentor, friend of Ulysses (Odysseus).

The first station of Telemachus was the kingdom of Nestor in the beautiful (as Homer mentions) Messinia. He arrives at dawn on the beach of Voidokilia (Voufrada) and finds the citizens of Pylos in the sandy beach.

Nine rows of five hundred people each slaughtered nine Bulls offering sacrifice to Poseidon,as such image would certainly be quite impressive, something like voidokoilia during the fifteen  of August, but instead of bathers, a crowd of 4,500 people with Nestor and his sons in the middle offering sacrifice to the God of the Sea.

By the time they were finished, the ship had arrived and Telemachus with Athena walked among the crowd. There they found Nestor with all his sons  cooking the meat from sacrifice in order to eat. Once they saw the strangers, they didn't ask anything,just invited them to sit in their company. They even put them next to Nestor and Prince Thrashimidis. The strangers were given rations/portions to eat and wine to drink as they then asked the mentor (the transformed Athena) to make the first wish.

There in the sand, Athena wished Poseidon to always grace/favor with luck Nestor and the inhabitants of Pylos and the feast began until their souls were full of food and drink.

Then, and only then, after eating and drinking, King Nestor asked to know who they were and where they came from.

Telemachus introduced himself while on the beach,as Gerinios Nestor, began narrating the epic battles who took place in front of the castle of King Priamos, expressing his admiration for the resourceful Odysseus.The end of this narration was about how each one returned safe to their homeland,after everyone went their own way.