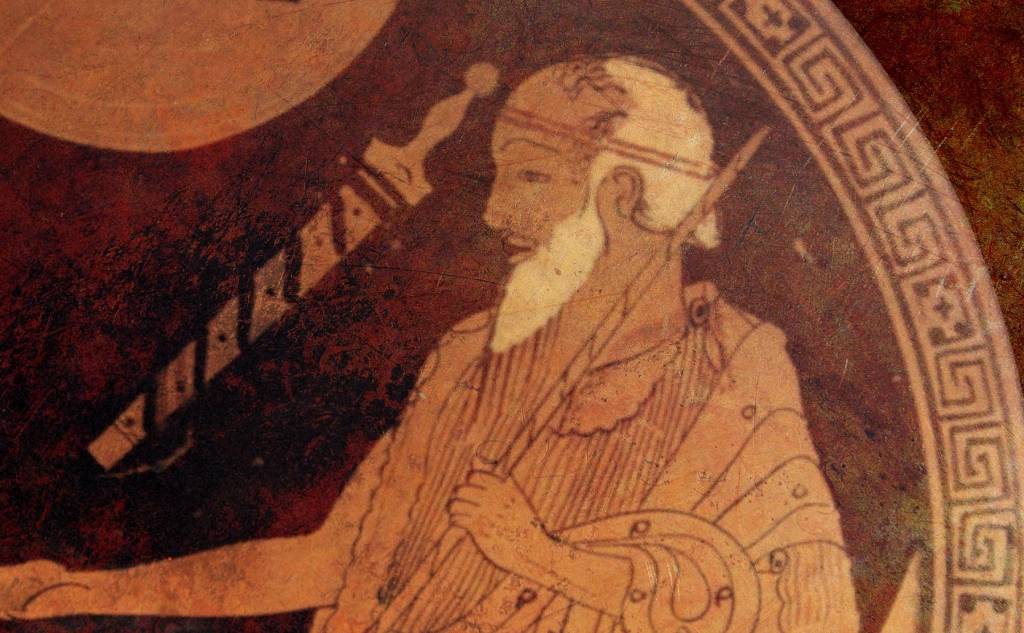 He was the son of Neeleus and Chloris.

Nestor was living at the time among the Gerenians in Messenia, hence the name Gerenios,in the land of ippodamaston (The ones who tame and  train horses),when all his brothers were slain by Heracles, (because Nileas refused to purify him for the murder of Iphitos).Nestor alone escaped,and lived a life rich in labors and exploits, as well as long in duration,more than three generations, due to Apollo's generosity, who wished with this gift of longevity to atone for the years of life that took away from the aunts and uncles of Nestor, when he killed them with the help of goddess Artemis.

THE BRAVERY OF NESTOR

Growing up, he became a great warrior. He fought against the Arcades and killed the terrible Eredalionus(Ereutalione),a noble Arcadian,then he also killed Itymonea,for stealing oxen from him and Mulio,while the Mulionides with Kteatos and Evritos, needed Poseidon's help to escape his sword.

He also took an important part in the battle between the Centaurs and the Lapithae,in the Argonautic expedition, in the Calydonian boar hunt, and last but not least in  the expedition against Troy.

THE CAMPAIGN IN TROY

Here, according to Homer,who presents him as a wise and wise old man, in spite of his great age,he gives advice and he is heard with respect from all the Achaeans. With these qualities,wisdom, justice and eloquence, kept the miscellaneous Greek army united during the siege of Troy,while he reconciled situations maintaining the Concord as it did during the quarrel between Achiles and Agamemnon.

When the siege began to favor the Trojans and while the army of the Greeks, especially with Achilea's refusal to descend into battle, began to lose, it was Nestor who persuaded the faithful friend  of Achilea's ,Patroclus, to dress in the uniform of his friend and lead the Myrmidons (the Warriors of Achilea) to the battlefield. This was an event who played a catalytic role in the outcome of the Trojan war since in the battle that followed Patroclus was killed and Achileas returned to the side of the Greeks ,while with an unprecedented mania for revenge, he then killed Hector Prince of Troy.

After the end of the Trojan War we meet Nestor in Pylos, where Telemachus, son of Odysseus, fled to sought further information on his father's fate. Homer reports that Nestor, not knowing who was Telemachus, welcomed the stranger on the beach of Voidokilia, led him to the palace, and after he offered him food and hospitality, at the end he asked him who he is. This is,just a sample of his unique personality.

Aimportant reference has been made in Homer's epics,regarding Nestor's Cup from which he drank wine and water. Described as a big solid-gold goblet with four handles with carved birds which was so heavy that even the strongest warriors found it difficult to pick up.Nestor, though old, he could take it in his hand and drank with ease.

Throughout Greek mythology, with the weak gods and humans, Nestor remains the only one intact, with a personality full of wisdom, justice and hospitality,all those elements  considered important,by the the ancient people.This is why,Nestor,inspires even today not only within the place that lived,but also to the ends of the world...