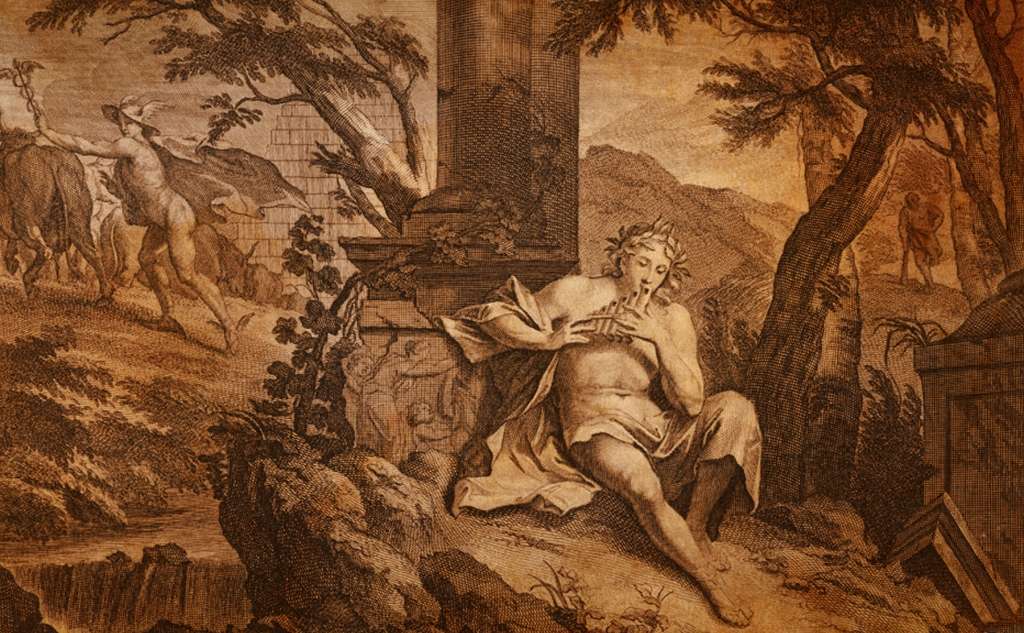 The famous beach of Voidokilia, may not have the most attractive name but it surely compensates every visitor with its perfect shape, staggering scenery and of course the particular natural beauty ,of this land.

It's name comes directly from the Homeric epics where it is mentioned ,as Voufrada, which means “where the oxen live”. In an ancient inscription we can see that they used to refer to it,also as  'Vuvota' which means Voidokoilia.
All this is found in an ancient myth which implicates gods and of course oxen!

Apollo was punished by Zeus for killing the Cyclops. His punishment was to offer services to the King of the Feron ,Adamitos, as Shepherd of his herds/flocks.

Hermes was just born. As an infant he was mischievous and scandalous ,but as a divine infant but he had extraordinary abilities.

During that night he couldn't sleep as he slipped away from his mother - the nymph Maia- and his long wide woven films, with which  they used to wrap babies. On his way out, he found a sea turtle, and he started poking around.  He then turned her over/upside down and from her shell  made a lyre ( Greek:  lýra) to play music.

While playing,he saw the cattle his brother was grazing.He chose among the  oxens and he took the 50 best of them, leading them to the cave above Voidokoilia in order to hide them,thinking that Apollo wouldn't miss a few.

THE INVENTION OF FIRE AND THE FIRST SACRIFICE

On the way to the cave Hermes got hungry,so he slaughtered two ocens,though he didn't know how to roast them. He then took two chopsticks and rubbed them with such skill that in the end they lit up. He divided one into 12 shares and sacrificed it, as an offer to the gods, and when he finished, he  just ate the second.That was the first sacrifice which were ever made.

Hermes after the subsequent theft of Apollo's sacred cattle,was not that lucky,since Apollo, who had fortune telling skills, discovered who had taken his oxen which made him very angry.

He went to the cave of Maia, grabbed Hermes and took him up to Olympus. There, with Zeus present, Hermes gave an oscar interpretation, trying to fool Zeus,disputing over his baby age , but the God of the Gods did not quite believed him ,recognizing that was his son and that he was capable of more things, Zeus ordered him to tell where he had hidden the oxen. .

PEACE AND FRIENDSHIP BETWEEN THE TWO BROTHERS

When they visited the cave,Apollo saw that two oxen were missing.Hermes told him that he sacrificed one in 12 pieces for the gods and that he ate the other one. '' Why twelve ?'' Apollo asked '' who is the twelfth?'' as hermes replied '' My self of course''. Baby hermes was quite pleased with him self so he pulled out the lyre ,he had made him self,starting playing music.

When Apollo ( the God of Music ) heard the lyre, he was thrilled. He asked Hermes to gift it to him and in return he  would have given him more oxen.

The myth narrates that as soon as Apollo got his hand on the lyrewith his fingers touching the strings,even the waves of the sea stopped chasing one another ,in order to listen to that beautiful melody

The Capacity of Hermes at inventing and manufacturing musical instruments, was followed by another exchange .Hermes made a flute, and Apollo, in order to acquire it, he gave him the golden rod, the known caduceus *, which became the symbol of the god Hermes.