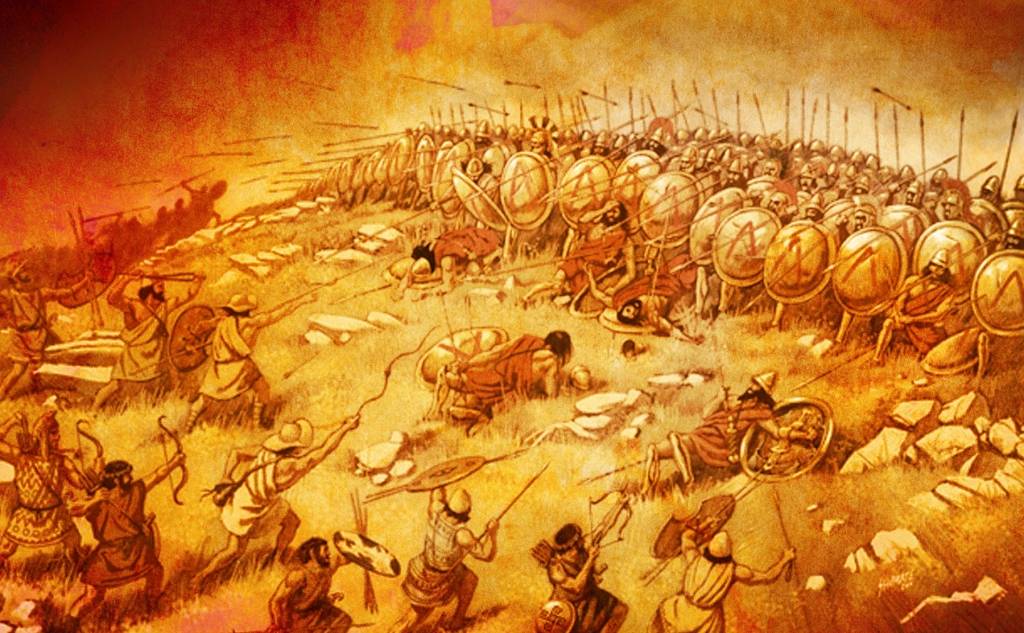 In 424 BC the Peloponnesian war was already in its seventh year, and the Athenians had not made a single victory against the Spartans in the Spartan territory.

It was then that General Demosthenes sailed with five triremes along the western Peloponnese with the aim to reach Zakynthos to join the greatest Athenian squadron that was there under the commands of General Evrimedon. The official mission of the two generals was to sail to Corfu to reinforce it against a new attempt by the Peloponnesian fleet, especially the Corinthian one.

However, Demosthenes had another plan. He entered the Navarino Bay and disembarked, at a natural fortified protrusion, just across the northern end point of Sfaktiria, the entire armed crew of his ships: 900 lightly armed rowers, 150 soldiers and 20 archers. In total, he had an army of 1,076 men, along with the five captains of his ships and himself. He even ordered the fortification of the narrowest isthmus, which separates the Cape from the mainland. The ground in the north of the isthmus was rugged and marshy, while in the south smooth and sandy. His capture was a risky move on the part of the Athenians.

At that time, Sfaktiria Island belonged to Sparta, as did the whole of Messinia from the 7th century BC, but the vast majority of its inhabitants were slaves who were ruled by the Spartans. Their obedience to the Spartans was doubtful especially since they had, relatively recently, been defeated during the Third Messinian War.

The Spartans did not quickly realize the Athenian movement to disembark. The first to discover the Athenian army were some Messinians who approached the Athenians secretly but in a friendly way. They helped them with supplies and with a small number of casually armed men who were chosen among those who were unmarried to avoid the spartan retaliation.

Once the Spartans discovered the capture of Sfaktiria by the Athenians, they sent a military squad that camped on the sandy beach south of the cape. A few days later, a squadron of 40 triremes of the Peloponnesian Fleet arrived (Corinthians and Spartans). To make the exclusion of the Athenians worse they disembarked a guard of about 600 Spartans on Sfaktiria.

Before the naval exclusion being fully completed, Demosthenes had enough time to send two triremes to Zakynthos, requesting reinforcements from the main Athenian army which was under the Eurymedon’s command. As a result, the Athenian forces were forced to go to Sfaktiria as soon as possible, on which, the people there were still able to hold the attacks of the Spartans and their fleet for several days, due to the natural fortification of the island.

When the aid under Eurymedon’s command finally arrived (20 triremes), they attacked the numerically superior Peloponnesian fleet and defeated it thanks to the superior naval capacity of the Athenian crews.

When Eurymedes reached the cape he argued with Dimosthenis, because all this was not in the official plans. Demosthenes simply showed him Sfaktiria and the excluded Spartans on it. Eurymedon immediately understood the plan and the opportunity presented to Athens.

On Sfakteria, almost 10% of the precious military (due to their great combat capability and the relatively small total number) of Spartan troops had been cut off. The options were two. Either Sparta would lose its soldiers or agree to a truce.

After a short siege, Demosthenes accepted a brief informal truce to provide the people at the barracks with water and a little food until the consultations for a final formal ceasefire or peace would be over.

In Athens of demagogic rhetoric, the politicians demanded that severe conditions should be imposed to the Spartans, since they believed that they had already won the Peloponnesian war by excluding part of the troops in Sfaktiria. The proud Spartans rejected the excessive conditions of Athens.

So Demosthenes was ordered to terminate the truce and exterminate the excluded Spartans. He managed to do so without the expected relatively big soldier losses by making a surprise attack to the worn out by many previous hardships Spartans with shots of spears and arrows from a distance.

In order to escape the massacre, a large percentage of the guard surrendered, to the great astonishment of everyone who saw the people who made the "do or die" historical phrase known to the whole world lose its mythical significance and glory...