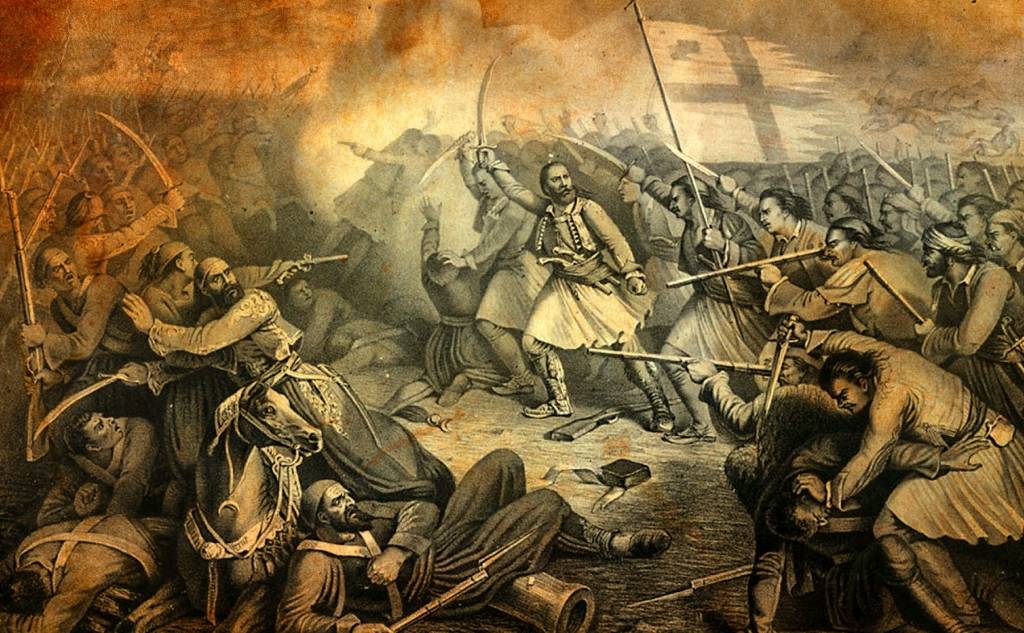 At the beginning of 1825, the Greek Revolution was in great danger, not only by Ibrahim, but also by the civil war. After the captivity of Neokastro (Pylos Castle), the Egyptian warlord quickly became the ruler of almost all of Messinia and was preparing to go against Tripolitsa, which was the administrative centre of the Peloponnese, and the Greeks, under the guidance of Kolokotronis in 1821, had conquered it.

Grigorios Dikaios (Papaflessas), then serving as Minister of the Military, saw that the Revolution was running great risk and feeling desperate, in an attempt to awaken the Greeks, had no other option but to campaign himself.

However, on reaching Tripolitsa, he was confronted with the soldiers' reluctance to confront Ibrahim. At that time, although he was a political friend of Kountouriotis and a rival of Kolokotronis, he recommended that the second should be released as well as other fighters of the revolution who were all held in prison in Hydra. After that, he went to Leontari, in Arcadia, where he gathered about 1,500 men and then fortified the mountainous village of Maniaki at western Messinia, which was in a rough location.

Ibrahim, knowing the position of Papaflessas' men, moved against them with 3,000 cavalrymen and infantry, something that left Papaflessas with no time to be well fortified in the temporary barricades. Some of the chieftains suggested that they should battle elsewhere because the site was inappropriate and the barricades they had built would be an easy task-target for the Egyptian cavalry. Papaflessas, however, insisted on giving the battle at Maniaki, counting on the support he was expecting.

On May 19th, the Egyptian troops, heading from Navarino to the mainland, appeared. Ibrahim's army was impressive in number. "The plains had been blackened by the big army," Fotakos, the warrior, writes. In the view of the numerous soldiers, more than 1,000 Greeks panicked and, leaving their positions, dispersed in the surrounding areas. So the Greek force now numbered about 300 warriors. The defeat was certain, so was death on that day, and the decision of the soldiers who remained to stay in their positions and face such an army, was a heroic act.

The battle began on the morning of May 20th, 1825 and lasted about eight hours. For the experienced Egyptians and their French officers it would not be difficult to curb the resistance of the few Greeks, although the latter fought with excessive bravery. So they completed the cycle and attacked with successive raids that were repelled. At noon, Ibrahim's army stopped the attacks to eat. Then the other Greek chieftains advised Papaflessas to let them try to get out and save as many warriors as possible because the mountainous terrain would help. However, Papaflessas did not accept for various reasons. Not only was he angry that he was abandoned by his men and he did not want to return to Nafplion as a loser, but he also believed that few would eventually get safely away from the Egyptian army fire. Moreover, he was sure that reinforcement would soon arrive. When the Egyptians made a general raid, they invaded the Greek barricades and killed almost everyone, including Papaflessas, whose body and head were found in different places. Very few only managed to escape by fighting hard, through a ravine, the exit of which was guarded by the Egyptians.

The reinfordement that Papaflessas expected would never arrive. The 1,500 men of Dimitris Plapoutas cast a few rifles from afar to give courage to Papaflessas, while his brother, Nikitas Flessas, with 700 men, and Elias Katsakos Mavromichalis with 1,000 other fighters, found out about the disaster when they arrived at the village of Koutifari and so they returned to their bases.

Even after many years, the sword torn skulls of the dead, Greeks and Egyptians were still at the place of battle. It was an unequal battle and Papaflessas was characterized, on a lithograph of the time which was printed in Paris, "The new Leonidas".

According to tradition, which some historians of the Revolution mention, after the end of the battle, Ibrahim asked his soldiers to seek and find Papaflessas' dead body. When they found it, he ordered them to place the head on the headless body and set it up against an oak which was (and still is) there. Then, Ibrahim admired the imposing height of dead Papaflessas and said, according to Fotakos, "Indeed he was a competent and brave man. It would have been better for us to have suffered double the damage, but to have the opportunity to have caught him alive”. In a popular narration, he kissed him on the forehead as a sign of recognition of his bravery and selfless courage.

The disaster at Maniaki was the beginning of the end for the revolution.

After his victory, Ibrahim went on and captured Arkadia. Then he completed the capture of Messinia with the burning of Kalamata and, decisively defeating Kolokotronis in the battle of Trampala, he managed to invade the heart of the Peloponnese and conquer Tripolitsa.

So, this is how it all ended for the rebellious Greeks who had lost almost the whole of Moriah. However, their sacrifices, like the one in Maniaki, had disseminated the philhellenic feeling across Europe, which was the cause that the three great powers sailed to the Navarino Bay, two years later, where the last act of the revolution and the ending of all fights was played in the great naval battle that determined the future of Greece.