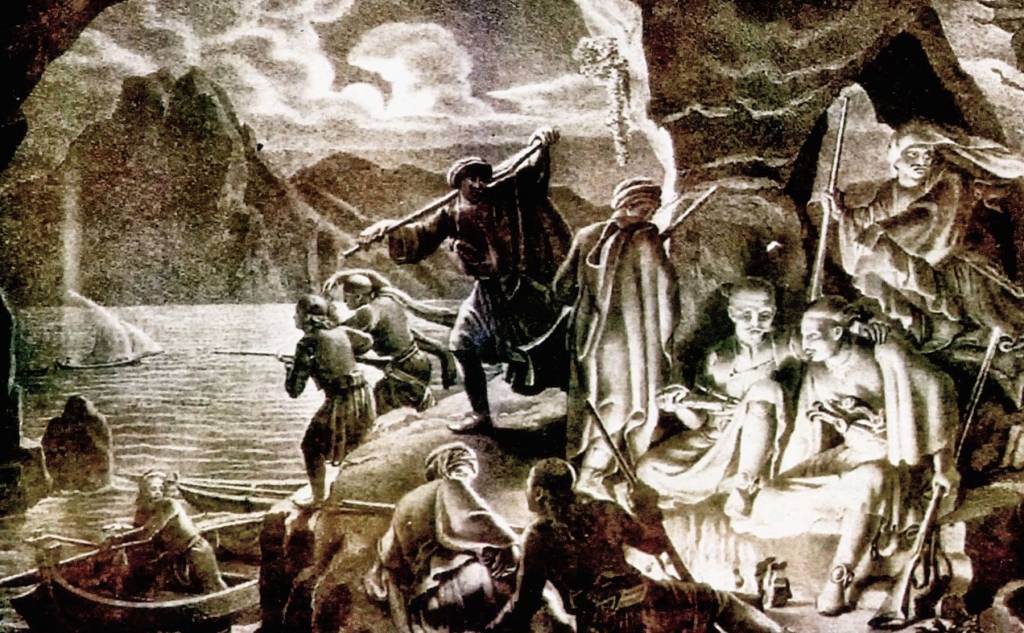 Piracy for the Manians was almost a profession -work to find resources,though it was also considered a martial act, as it was used to create obstacles, damage and quite some difficulties to the enemies (Turks) and to the aspiring conquerors of Mani.

The maniates are occasionally reinforced by the great powers with weapons and ammunition. Important station of the east-West Commercial Road, Mani with a deluge of pirate cases. Renowned, however, were the Pirates of Mani, especially after the 16th century, which it was resulted,to Itilo called the Great Algiers.

Here are the main pirated cases:

1405. The Venetians complain to Genova about the pirate activity of Nikolo da Moniglia in the marine space of Mani. 1405-1460. Catalans and Genoese pirates resolved the passages of the South (Methoni, Mani, Steno Elafonisos, Cape Malia).

1510. In Cape Tenaro,Christians pirates, arrested Genovian Galleon with a value of 12,000 Dutch ducatons.
In Porto Kagio, Daniel conceived the Galleon of Ancona and led it to Crete.
In the meantime, Venetians, Rhotians and Turks engage in piracy in the southern multi-track (Teenaro-Steno Elafonisos-Cape Malia).

1512 the coasts of Mani swarmed 46 Turkish fuste* and took with them 300 people from Koroni and 150 from Kythira. The Venetian Ambassador D. Trevixan who visited Itilo,said that the Maniates from fear of pirate raids had no furniture in their homes and slept on the earth.

1518. In Porto Kagio, Turkish ships Fuste, arrested May Nava of Ragousis, who was travelling to Chios. The Venetian Proveditore ( The office was brought by several senior administrative officials of the Serene Republic of Venice) spotted 4 Turkish fuste in Tenaro and captured one of them.

1521. The renowned Turkish pirate Sinan Reis-brother-in-law of the head of the Barbarian Barbarossa-who operated in the wider sea area of Mani, attacked with 4 Fuste the Nava( With the common naval term Nava were named the sailing merchant ships that brought three masts (masts) and full dependence of the war Corvette. The displacement of these vessels was from 500 to 800 tons) of Zuan di Stefano near Cape Akritas. The governor of Nava Michaltos-from Milos-burned alive ,trying to fire the gunpowder ,as his 19-member crew was injured.

1525. The Venetian Proveditore Z. Moro chased the pirate Bostan Reis who left the Turkish ships , Fuste, in Tenaro and fled with his crew on the shores of Mani.

1530. French naves, engage in piracy at the southern Polydrome.

1600. The French pilgrim at AG. H. Castella's places says that the Manians were armed as hedgehogs.

1601 Viviers and 4 Maltese galleons burned the fortress of Passava and enslaved 55 maniates.

1605. The Knights of Malta have scattered the Turkish fleed to Mani.

1615. Near Mani Kapoukan Pasha Halil-who led 37 galley-stops the Bertoni of Eemo and investigates if in it,are hidden maniates. He asks the Venetian Republic not to give refuge to the maniates because they rebelled against the "Acta et Diplomata Graeca and the Grande Sultan ",while in the same time Sicilian Galleons gave Porto Kagio 300 arquebuses *** and other weapons with which 800 Turks were killed.

1618.4 Algerian Bertonia with 300 men crew each one arrested the ship of Petros di Vescovi. He and his crew were rescued in Vitylo.

1624.13 Barbarese ships with Verisogli attacked Mani and attempted invasion,which failed as they returned to their ships by 200 less. In the next days as they were yet angry, they arrested their leader and led him captive to Barbaria.

1637. Belatedly arrived the letters to Kuno-for their relatives who were slaves to pirate of Bizertas-while when the Manians tried to liberate them, the pirates had already sailed.

1639. The French merchant vessel "Virgin of Loretto" was arrested by 3 Berganins and 2 feloukes**** of Mani.

1640. 3 Maniatiko Feloukes arrested 4 Turks of Nafpaktos. The same year the Maniates killed 4 pirates and captured 4 ,when they attempted to break into a wealthy monastery.

1644. The Famous corsair Antonios Maniatis with 22 men crew, arrested in a boat 5 Jews and a Turkish Lady with her maid.

1645 : Antonios Maniatis captured as slaves an Aga of Koroni and another 4 people. Outside Koroni, a naval battle was concluded as the Maniates killed 25 Turks and arrested 7 pirate ships.

1646. Maniates arrested a Turkish ship coming from Chania. Maniatika Breadinia, captured in Zante a boat,while aboard the ship, were three sons of the Excellency Georgie Cuerini. Also in Mani Maltese ships clashed with 7 Barbarese.

1655. Antonis Gerakaris captured a Turkish ship with 30 rowers in Elafonisi.

1668. La Guiletiere mentions that in the tower of Mani they captured Maniates who came out of the caves «..You see nothing but a bunch of white-haired, a kotroni. All of a sudden this kotroni [ "Hard soil, hardened mud", in the language of Corsica (Codru)], blows, shakes, jumps on you and grabs you by the throat..».

1670. Manians Pirates robbed the crew of 3 English warships and arrested 4 prisoners in Elafonisos, as indicated by the traveler Covel.

1673. Mr. Gerakaris brought 7 galleons from Malta to Kitries for the siege of Zarnata.

1703. 40 boats, 3000 residents of Kato Mani and 1000 maniates who passed Makryplagi attacked the plain of Kalamata. They were stopped by the Venetian, the Proveditore Z. Foscarini.

1710. The pirate George Manetas with 2 galatotes and 5-6 Feloukes was dominant in archipelagos and then flooded Mani with Turkish spoils.

«Big, robust soldiers.. and their women compete in Physical strength..»

1718. By the Treaty of Pasarovic the marine space of Mani-St. Elafonisos-Kythera and Falconeras, became the carcass of the Christians Pirates of the Aegean. Many pirated people sailed in Mani for repairs or to split their prey.

1720. The Belgian De Mirone reports that they anchored in Porto Kagio with the ships and the Maniates sold them merchandise. They even held hostages of two priests maniates who then escaped at night and started shooting. In the morning the ship was delivered to the cliffs (Maniates had cut them off at night) and managed to escape with 6 injured.

1727. The Cretan Nikoltos captured two lonts from Messolonghi in Kythira and brought them to Mani, where he resided.

1729. The Zakynthian Corsair, Mandrapilis captured French Tartana and led her to Mani.

1730. A. Fourmont, envoy of Louis XV, committed vandalism in the antiquities of Sparta to avenge the maniates.
Outbreak of Mani piracy in 1740-1770 throughout the Peloponnese

1747. The English Princess, with 76 cannons, operated in the Tenaro in the 18th Century. The Strait of Elafonisos was a centre of excursion and meeting of all Pirates of the West because it was the natural boundary between the Ottoman Empire and Venice. The triangle «Tenaro-Kythira-Cape Malia-Steno Elafonisos» was full of pirates.

1748. Maniatis Pirate (which was fear and terror on the ships of all nationalities) conceived French Tartana ***** and in February 1749 attacked the castle of Kythera and took with him the Castle's cannons.

1750. The infamous Maniatis pirate who was named ' one-eyed' terrorised all the ships from the Tenaro to the Aegean. In April,he captured a Greek Ship in Methoni, but later was Stalked by the Venetians and arrested by the Turks in Mani,while at the same time another master of the Maniates was terrorizing the archipelago. He,and his crew were arrested by Meneh.

1745-1755. 40 English pirate Ships, which had as crew not only native people but also Kytherians, anchored in Mani for repairs , as a lettre of Kyriakos Varamadas from Vatika, towards Vatikiotis Kolybodiakos.testifies.

1753. The Manians pirates plundered 5 ships,which were transporting oil in France.

1755-1763. The English used Maniates, tsiriotes ( The resident or the one who originates from Kythera) and other Greek Corsairs during the seven-year war with France..

1759. On the 4th of April,Loukas Valsamakis plundered a ship of Livorno in Kythira and led it to Mani.

1763 Pirate Pigos with 80 maniates, 16 cannons and with Mathios, as a governor of Corsica ,operated in the Aegean Sea and took a booty of Cotton ,from the Sabino of Santorini.

1764. Sklavounos ( Male name in the Ionian Islands as well as in regions of the Peloponnese; The Dalmatian mercenaries were named like this ) Markos Lukovic, equipped a pirate Feluca in Mani. On October 29, pirate attack (with over 150 Manians crew) and Tartana escaped the pursuit from Mani.

1760-1770. The Manians cooperated with the Maltese Corsairs. Widow Maniatissa ( Wife of a Pirate Captan ) in fact issued receipts of taxes and the Maltese Pirates allowed the free passage to all the merchants,who had paid the taxes. In Orlofia the Turks slaughtered all thoe from Spetses who did not manage to escape to Mani. During this period many Sfakians pirates acted in the marine space of Mani-Elafonisos-Kythira-Cape Malia.

1788. Nicholas Mavromichalis captured in Kimolos, a French briki ( Brig) with a load for the Turks and transported it to Mani. In that battle for liberation, the Manians wounded 46 Frenchmen.

1802. Maniates conquered the Trawler of Michalis Kountouris in Sifnos

1803. G. Voulgaris received a mandate from Kapoukan Pasa to bust the pirate Lovos and other Maniates pirates.

1817. Panaghs Troupakis (Mourtzinos) with his pirate Galiota,captured 1 French and 1 Venetian ship near Kythera. The French consul in the Ionian Islands,A.Sauveur mentioned that the Manians pirates swim unseen as they cut the anchor and the hawsers to drop the ship out, where they lurk.

Based on his words,a naval proverb was born, known as:
«From Kavos Matapas/forty miles away/and from Kavos Groso/.. And further, more than forty ... arms of the sea, many miles away at the awesome rock of Cavo Grosso to scare.».

1828. Kapodistrias proceeded to prosecute piracy in the free Greek state.

* Fuste : A narrow, light, flat and agile ship powered by both oars and with a cloth (Latini)

** Karamuzal : A vessel with a long hull and a high stern: a two-masted merchant ship

*** The arquebuse was the precursor of the current rifles.

It was an old rifle-type rifle that appeared at the beginning of the 15th century and was used until the end of the 16th century.
They were heavy front rifle that was based on the shoulder and were detonated by an external hammer (wolf) in which it was previously fitted with a fuse.

**** Feloukes: Was a type of small wooden boat in the area mainly of the eastern Mediterranean, low and unmoved (without deck) that was moving with oars and sails, bearing three Latins and Artemona.

***** Tartana:The Dartana or Tartana, was light, agile, with small displacement and beautiful boat line, of the most common, in the 18th Century.

****** Briki:The Definition of the word briki or Vziki comes from the English brig or the French brick. It was the last of the great warships and the strongest after the Corvette, sometimes amounted to power, has been the main ship of the War during the revolution.