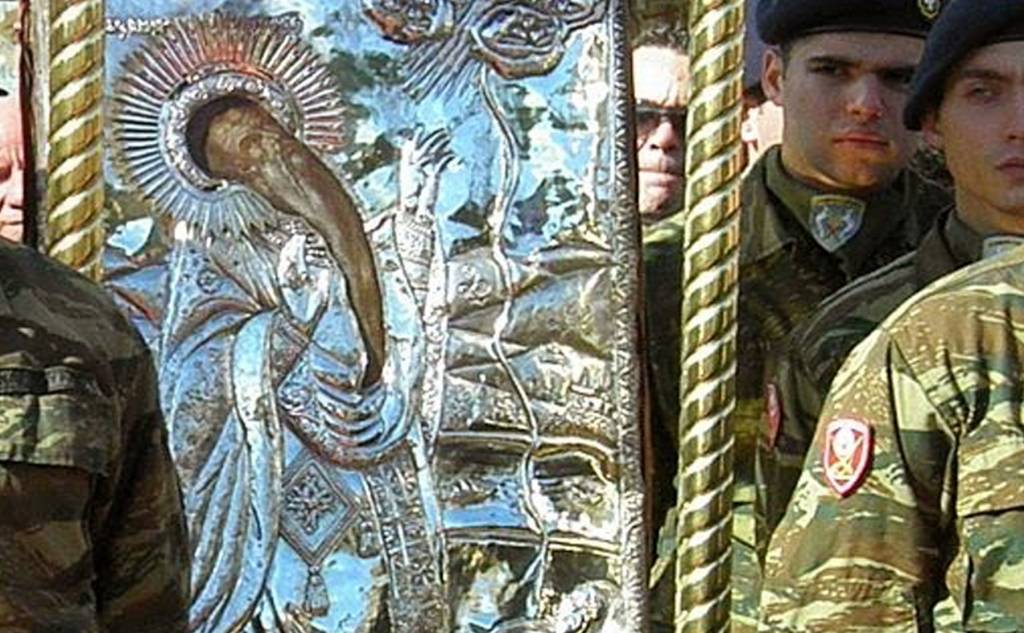 In 1943, the German Headquarters of the Tripoli ordered the German Commander of Filiatra, Kontau, as retaliation for a sabotage that the rebels had accomplished, to burn Filiatra, to kill the prestige Ealdormen ( the special title of people exercising authority of the city )and capture of 1,500 residents by sending them to concentration camps,in Germany. Kontau instructed his soldiers to proceed with the execution of the order the dawm of the next day.

This was learned by the priest Theodoros Kotsakis, from Filiatra, as he later attempted unsuccessfully, to mediate with the harsh conquerors. Leaving the German headquarters without succeeded in negotiation, the priest alerted the Philiatrians of Tripoli to prayduring the night to Saint Charalambos, the patron saint of Filiatra, to help the 'outcasts'.

According to testimony of the German commander, that same night he saw in his sleep an elder clergyman. venerable, majestic, who asked him gently not to execute the dire command.

The Commander impressed by the dream, woke up but a bit later he fall asleep again not that affected. The old man reappeared saying the same words, adding that he would make sure that the commander was not punished for disobeying his superiors.

The German senior officer woke up as his mind was troubled by the words he heard in his dream,though he knew that it was quite impossible not to execute the orders as the punishement would have been severe. He slept in again and after a while, the elder appeared for the third time saying to him: "I told you not to be afraid. I'll take care of it and neither you nor your men will be punished as you will return to your homes without anyone  harmed. "

The old man never reappeared, but the German officer had a bad night.

Once he went back to sleep he thought he heard yells and cries,  from tortured people in his backyard.Later he was approached by vivid figures, which looked like women who were hurting them selves in the breasts out of misery. The figures grieved and cursed for the massacre of their children as it was expected. All of these voices  becamea cloud which went up to the sky, as the commander  was seeing more dark clouds, coming out of his room  shading out the sun and darkening the faces of the soldiers. Others of them frightened and others were calling for help.

He woke up terrified. He tried to speak, but remained silent watching again the form of the elder. When he came to his senses began to think of all the bad which was going to happen. These thoughts upset him though  the “duty” as an officer of Hitler's,called on to do that heinous act. He closed his eyesa and the old man appeared again, but this time he showed him that he wasn't kidding. With a voice strong and authoritative, he said: “Watch out! The city will not be burned and the inhabitants will not be captured. They are innocent. Can you hear it?”

He stood up and while yet dawn, he called  his superior in Tripoli. He started talking with a trembling voice, but to his surprise he realized that also the military commander of the Peloponnese had seen in his dream an old man,understanding quite immediately that this figure was the same which appeared in his dreams. Eventually the commander of the headquarters of Tripoli's announced:
«Write down: I'm suspending the destruction of the city. Come right away before me tomorrow noonday». Next dawn it was announced the revocation of the German decision.

The residents of Filiatra gushed happy ,in the cafes, in the square, on the streets, until they spotted a group of Germans in the company of the higher officer, Κontau and two Orthodox priests, walking to one church to another and another.The officer were trying to find the old man that his shape reminded him of an Orthodox Saint. When the door of the Temple of the Virgin Mary,opened, he stood in front of the icon of St. Charalambos.

His voice was cut off as he was feeling ashamed.He Covered his face with his hands.In a moment he lowered his hands as he then made the sign of the Cross,saying some prayers in his own language. The German officer asked  the priests to tell him who was the elder of the image. The Priests replied, that the figure he was seeing ,was the miraculous Saint Charalambos, who suffered many tortures for his unconditional love in God/ Christ.

The immense gratitude  of Fliatra citizens towards the Holy ,just couldn't be   described. They glorified God and thanked  the Saint for that miracle. The German officer and all of his men of the guard  returned unharmed back in Germany when the war was over.

The officer kept a vivid memory of that miracle and after a few years,with his wife from Germany, he returned back to Filiatra. He didn't, however,managed to arrive in time for the feast of the Saint, because he arrived on the 11th of February. To his surprise when the inhabitants of Filiatra, recognized him,they rejoiced and celebrated again.They started chanting as they were quoting him offering their thankful wishes over a festive table.

Many times later on  the Kontau family with their children and other Germans visited Filiatra on the 10th of February and prayed with faith to the Saint.

In the heart of the German commander,it was already blooming Orthodoxy...

The Castle of Fairytales