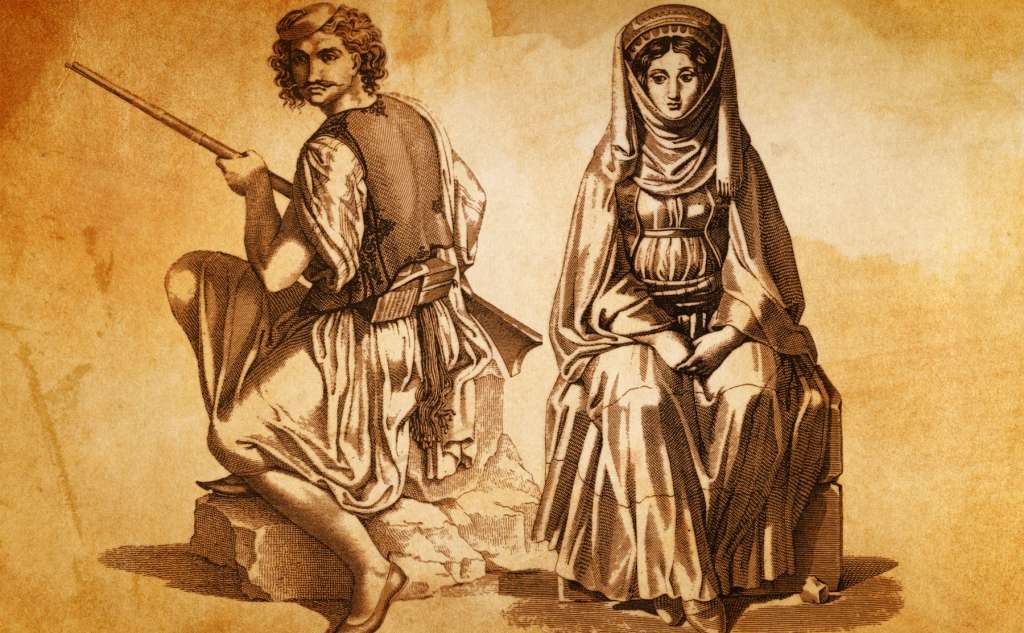 Between the people of the Peloponnese and those of Mani there was a great number of significant differences as far as dressing is concerned. The men of Morias were wearing the “fustanella”, while on the opposite hand, the men of Mani were wearing “salvari”,(breeches), reaching down to the knee. Their way of dressing looked alike the one of the islanders, since their transactions took place in the sea and not on land. More specifically, men wore  dark blue breeches, white, wide shirt with embroidery on the sleeves, red waistcoat with black cord, striped girdle, fez or black scarf, black socks and “tsarouhia”,(shoes), made out of pig’s skin.

Women, throughout Ottoman Empire, were wearing breeches reaching down to the ankle, while women of Mani were the unique exception of all Turkish-occupied regions, since they wore dresses likewise in Europe. Women’s costume consists of the “velesi”,(interior cotton dress), which is usually dark blue in color, a long shirt with embroidery on the sleeves, a short coat on top known as “kontogouni”, a belt, a headscarf and “tsarouhia”,(shoes). The color of the headscarf depended on woman’s age. The younger ones wore white, yellow or light brown. The older they got, the darker the color was. Black headscarf was for the oldest. There was a red stripe,(a span wide), sewed on the “velesi”, known as “bougazi”. All happy women, married or not, wore the “bougazi”. When a woman’s husband was dead, she used to put a piece of that red stripe on his grave, while when a brother had died, she used to unravel and place the whole piece on his grave.